Penguin is a small town on the north coast of Tasmania. The small settlement was named Penguin by the renowned botanist Robert Campbell Gunn because he had seen lots of Penguins inhabiting the beaches around here. The settlement was founded as a port for shipping out timber from the heavily forested hinterland to Victoria on the mainland. By 1875 the settlement was large enough to be designated a town and was one of the major ports on the coast. This is hard to imagine now as flow of water from the basin in Penguin Creek to the sea is practically dried up. I can only imagine this is where the port was located as the rest of the town faces a gently shelving sandy beach.

The area around the creek is now the attractive Hiscutt Park with a curious miniature windmill in it. It is a one third size replica of a Dutch Wipmolen windmill that was a Bicentennial gift from the Dutch community of Penguin in 1988.

Between Hiscutt Park and the beach runs the railway line and this is where Penguin Railway Station is located. It is a narrow gauge (3ft6in) line and along with all other rail tracks in Tasmania it only carries freight these days. There seem to be two trains a day that trundle very slowly and must have hundreds of wagons as the train seemed to take about 10 minutes to roll past the house where we were staying. The station building is now used a meeting place or event venue since it is no longer needed for passengers.

The railway was opened in 1901 and so, presumably was the station. Next to the station is the Old Gaol which looks more like a fortified garden shed – presumably the citizens of Penguin were a fairly law abiding bunch! The gaol was in operation from around 1902 until 1962 and was originally located behind the courthouse.

In 1992 it was refurbished and moved to a site next to the railway station. We noticed that the penguin motif was used in all kinds of ways around the town, for instance on benches and rubbish bins. We particularly liked the colourful penguin shaped bollards, some of which had a backpack for disposing of your doggie doo bags!

Across Main Road from the station is Penguin Beach which stretches about 700m between two small headlands and is backed by a promenade, grassed areas and some large trees.

There are numerous benches with attractive mosaic designs on the back

and there are also numerous places along the prom and on Main Road with tables and chairs laid out for people to use which gives it a friendly, personal feel. 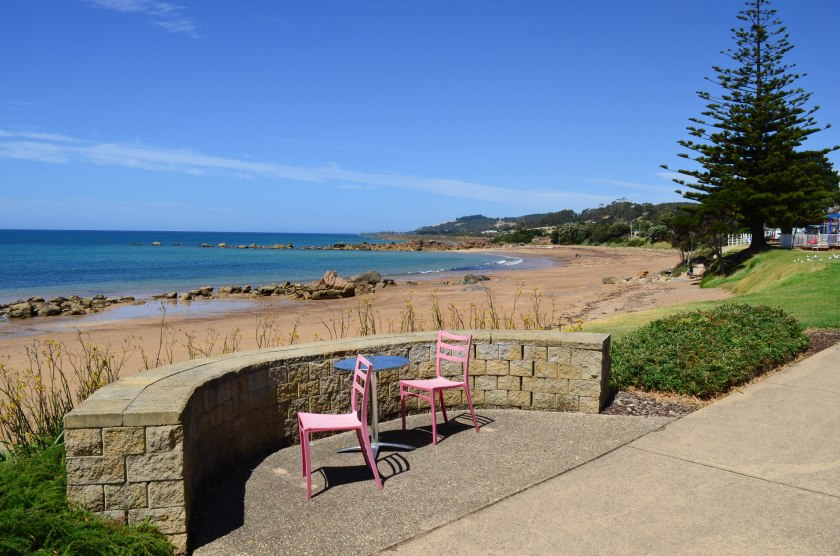 There are not many people on the beach, despite it being the middle of summer, but that is not surprising since despite the latitude it is colder than England. The average high in January is only 21oC and it almost never reaches 30 – the all time high is 33oC. It is partly due to the ‘Roaring Forties’ blowing almost constantly through the Bass Strait and keeping the temperature down. It also means that the sea is really cold, so not too good for swimming, unless of course you are a penguin! The Bass Strait is the stretch of sea that separates Tasmania from the Australian mainland, or more specifically the state of Victoria. Near the railway station on the front facing The Bass Strait is the most striking building in the village – The Uniting Church. This was originally a Methodist Church which was built in 1903 to replace the original smaller church. It is a timber built church, making the most of the abundant local timber and is in the Federation Carpenter Gothic style.

For all it’s attractiveness it looks a little out of place here, which is not too surprising as Carpenter Gothic is a style from the late 19th century in America. Main Road runs along behind the promenade and the inland side of the road has a variety of shops, modern apartments, boutique shops and cafes, which gives it a bit of a touristy feel, so it’s surprising there aren’t more restaurants and bars.

Opposite the shops, between the playground and the war memorial is Penguin’s most famous attraction – a giant Penguin! It is made of concrete and covered in plastic and was erected in 1975 to commemorate the 100th anniversary of Penguin becoming a town. 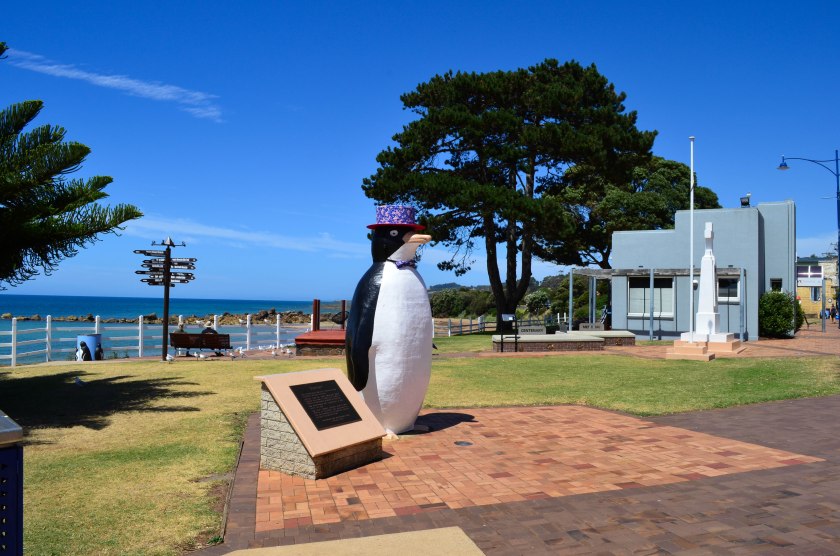 It is claimed to be the most photographed thing in Penguin. Further along Main Road to the east is the bungalow where we stayed for 5 days. It was a very peaceful location to spend five days recuperating after our Australia tour. We manged to wash and iron two suitcases of clothes in preparation for our New Zealand trip. It took us most of a day to do all the ironing but being able to do it in front of two huge picture windows overlooking the Bass Strait made it less of a chore.

Penguin is was a tranquil and pretty place to spend a few days, but I am glad we were self catering as there are not many eating out options, and not a great deal to do.